Document security: An imperative in the IoT era

The far-reaching financial, legal and repetitional implications of a data loss mean that information security is a business imperative. Safeguarding the ever-increasing volumes of valuable corporate data against unauthorised access has become integral to maintaining business operations and adhering to increasingly vigorous data privacy compliance requirements.

For many organisations, their cyber-attack surface area is increasing as connected Internet of Things (IoT) endpoints proliferate. These include both legacy and the new breed of smart printers and multifunction printers (MFPs). Consequently, businesses must take a proactive approach to print security as these print devices can provide an open door to corporate networks. By taking steps to analyse the potential vulnerabilities of print environments, businesses can mitigate risks without compromising productivity.

October 2016 saw one of the worst distributed denial-of-service (DDoS) attacks in history, when a strike on DNS provider Dyn took a major part of the internet’s DNS infrastructure offline – including Amazon, Twitter, Spotify, Netflix and Reddit. This attack is representative of the increasing complexity of the data security threat, and the rising number of high-profile breaches that are affecting hundreds of millions of users worldwide. Its nature also signals the evolving shape of the threat: the attackers targeted the rapidly growing network of connected devices known as the Internet of Things (IoT).

The number of IoT devices – think vending machines, thermostats, video cameras and networked printers – is estimated to reach anywhere between 20 and 50 billion by 2020. These devices are smart and connected, but they are also vulnerable. IoT devices can be remotely managed, and are able to generate, store and retrieve a wealth of data as well as initiate service or maintenance requests. For hackers and malware looking for a way into a corporate network, unsecured IoT deployments provide the perfect entry point.

The true impact of a data breach

The consequences of any networked device being compromised are far reaching, whether the outcome is downtime or data loss. A data breach can leave a company open to huge fines and legal penalties and damage its reputation and customer confidence. According to PwC1 90% of large and 74% of small UK organisations reported suffering a data breach in 2015, while a 2016 study from the Ponemon Institute2 reveals the average total cost of a breach to be $3 million, with the average cost per stolen record $158.

In Europe, the penalties for a data breach will become even higher when the new General Data Protection Regulation (GDPR) comes into force in 2018. Companies that handle EU citizens’ data will have new obligations in a number of areas – including data subject consent, data anonymisation and breach notification – requiring major operational reform. Regulators will be authorised to issue penalties equal to €10m or 2% of a business’s global gross revenue, whichever is greater, for breaches. The UK will be required to comply with the GDPR, whatever the agreed terms of its exit from the EU, as member countries will remain key trading partners.

Implementing strategies to ensure that data on endpoints is protected from theft, loss, digital intrusion or prying eyes is therefore critical to any organisation.

With its advanced connectivity and capacity to store large volumes of data, the multifunction printer (MFP) has long been a ‘weak link’ in the IT infrastructure – one that businesses can no longer afford to be complacent about.

The MFP has brought increased convenience and improved productivity to the office environment. A smart, sophisticated device which runs its own software and services, it has evolved to become an integral document processing hub capable of handling print, copy, fax, scan and email. However, its ability to monitor usage and collect data, as well as network connectivity only increases the potential for exploitation by hackers.

With MFPs often situated in easily accessible locations, if the proper controls are not in place it is all too easy for unauthorised users to get their hands on confidential or sensitive information left in output trays – either intentionally or by accident. In a recent survey by Quocirca, 61% of large enterprises admitted suffering at least one data breach through insecure printing.

This security gap must be closed. Organisations need to take steps to include effective print security as part of their overall information security strategy. This should encompass a full evaluation of security risks associated with the existing print infrastructure at a hardware, user and document level, the implementation of the technology, and user engagement.

Despite the move to digital communications, many businesses still rely on printing to support key business processes. MFPs are prevalent across businesses of all sizes and as such they are a critical network endpoint that must also be secured. Even behind a firewall, an MFP can be a front door to the network leading to the potential for compromising corporate or customer data. 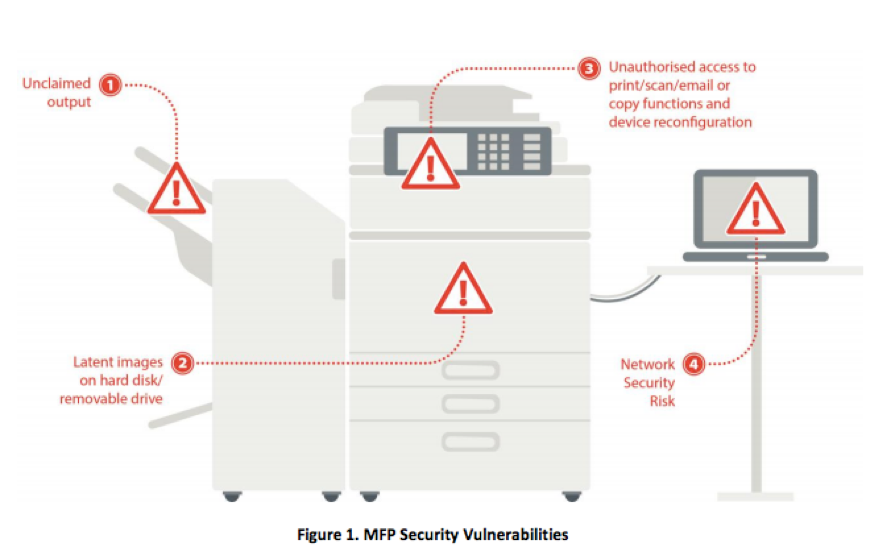 The potential risks are illustrated in Figure 1. These include:

The prevalence of a print data loss 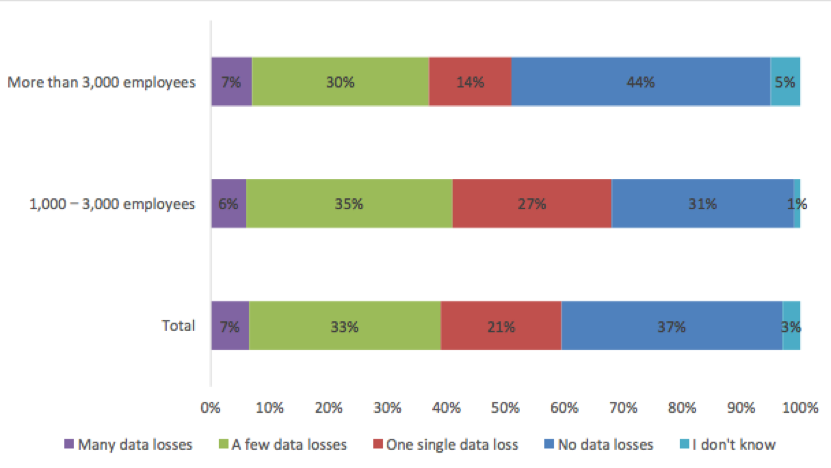 Those organisations that are operating a centralised model based on shared MFPs are less likely to have experienced data loss – 38% indicated no data losses compared to 18% of those operating a distributed model of workgroup printers (Figure 2). 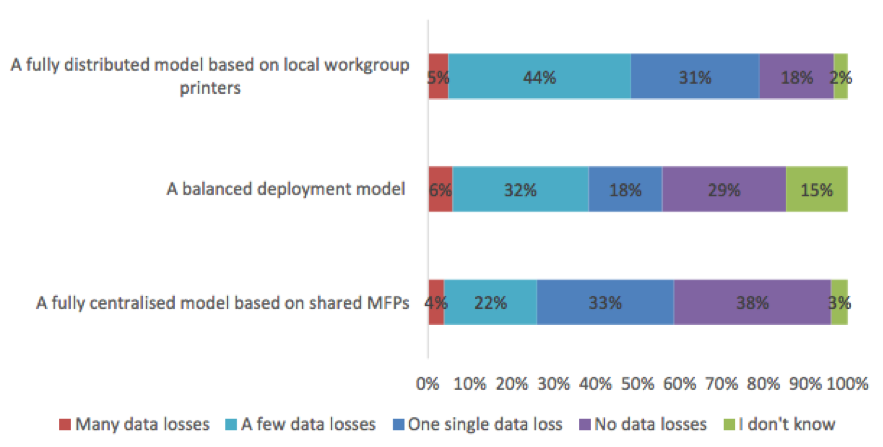 While 67% of those operating a multivendor fleet reported at least one data loss, this dropped to 41% for those that were operating a standardised fleet (Figure 3).

A standardised environment is always going to be easier to control given that security functionality and tools can be applied consistently to all equipment. And normally, these organisations are further along in their MDS engagements and will have benefited from security assessments. This reflects the benefits – from an IT management and user perspective – of a consistent approach to security that is possible with a single hardware brand.

However, in many organisations, it is typical to find a patchwork of devices from different vendors which in turn require different tools and software platforms. Although a best of breed tool can be used across a mixed fleet to enable secure printing (such as pull printing), there remains a challenge in protecting the vulnerabilities of older or legacy devices which may be more exposed than newer devices with built-in security features against today’s threats. 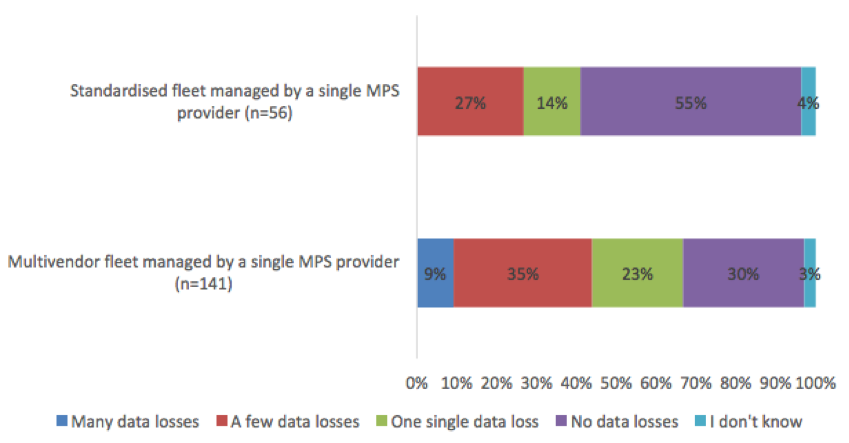 So, what is the nature of the data loss from a print perspective?

Notably although access to the network was a top concern amongst the majority of respondents, these concerns may be unfounded. Only 18% reported that an unsecured MFP has led to unauthorised access to the network. However, almost half reported that network interception, hard disk theft and unauthorised access of unclaimed output were factors (Figure 5). 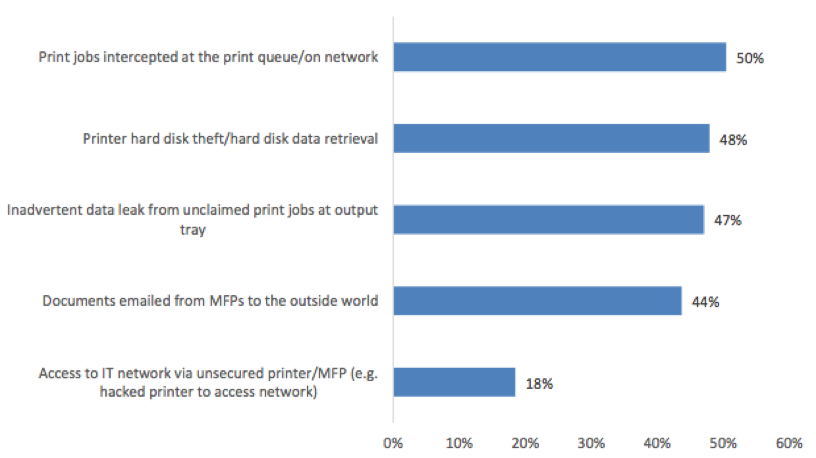 Closing the gap in print security clearly requires a range of measures. Most manufacturers offer a combination of built-in security features – both hardware and proprietary and third-party software tools.

Given the multiple points of vulnerability in the print infrastructure, businesses must employ a layered approach to print security. This requires a combination of activating built-in hardware security features, implementing software tools such as pull printing and educating users on responsible and secure printing practices.

MPP recommends that the following measures are taken:

If you’d like a print infrastructure assessment, please enquire with MPP using the form below:

01243 769035
enquiries@mppdigital.com
Find out how seamless and cost effective reviewing your document infrastructure can be. Get in touch to arrange your initial consultation

We use cookies on our website to give you the most relevant experience by remembering your preferences and repeat visits. By clicking “Accept All”, you consent to the use of ALL the cookies. However, you may visit "Cookie Settings" to provide a controlled consent.
Cookie SettingsAccept All
Manage consent

This website uses cookies to improve your experience while you navigate through the website. Out of these, the cookies that are categorized as necessary are stored on your browser as they are essential for the working of basic functionalities of the website. We also use third-party cookies that help us analyze and understand how you use this website. These cookies will be stored in your browser only with your consent. You also have the option to opt-out of these cookies. But opting out of some of these cookies may affect your browsing experience.
Necessary Always Enabled
Necessary cookies are absolutely essential for the website to function properly. These cookies ensure basic functionalities and security features of the website, anonymously.
Functional
Functional cookies help to perform certain functionalities like sharing the content of the website on social media platforms, collect feedbacks, and other third-party features.
Performance
Performance cookies are used to understand and analyze the key performance indexes of the website which helps in delivering a better user experience for the visitors.
Analytics
Analytical cookies are used to understand how visitors interact with the website. These cookies help provide information on metrics the number of visitors, bounce rate, traffic source, etc.
Advertisement
Advertisement cookies are used to provide visitors with relevant ads and marketing campaigns. These cookies track visitors across websites and collect information to provide customized ads.
Others
Other uncategorized cookies are those that are being analyzed and have not been classified into a category as yet.
SAVE & ACCEPT